The theme of the next September Tanoshi Me Box will be OTSUKIMI or the full moon festival.

Tsukimi (月見) or Otsukimi (お月見) means “to watch the moon”. It is a festival that honors Autumn’s moon.
As there is no exact date (it follows the traditional Japanese calendar), Tsukimi takes place generally in the middle of October and the beginning of October.

It is an old tradition where people admire the full moon and decorate their home with susuki (Japanese pampas grass), and eat rice dumplings called Tsukimi dango to celebrate the beauty of the moon.
Seasonal produce as sweet potatoes is also displayed as offerings to the full moon, while beans or chestnuts are offered to the waxing moon the following month.

Origin of this festival

Tsukimi refers to the Japanese tradition of holding parties to view the harvest moon. The custom is thought to have originated with Japanese aristocrats during the Heian period; influenced by the Chinese custom of Mid-Autumn Festival, they would gather to recite poetry under the full moon of the eighth month of the solar calendar, known as the “Mid-Autumn Moon.
The Japanese also had another full moon festival, which was local and agricultural in character.
This is the reason why in popular tradition the moon festival is associated with the harvest festival.
The tradition of Tsukimi originates from China and became very popular during the Heian period when Japanese aristocrats loved to gaze at the moon while indulging in poetry and music.
This contemplation could be done on the terrace, outside in the gardens, or on boats or while admiring the full moon in the open air, they tasted sake and took advantage of the refreshing autumn air. Just before harvest time, it is auspicious to take the time to contemplate and thank the moon with offerings for the blessings it brings.

The symbol of this festival is a white rabbit. It is represented on all the products related to this festival.
It comes from an ancient Japanese legend:

Many years ago, the Old Man of the Moon decided to visit the Earth. He disguised himself as a beggar and asked Fox (Kitsune), Monkey (Saru), and Rabbit (Usagi) for some food.

The monkey climbed a tree and brought him some fruit. Fox went to a stream, caught a fish, and brought it back to him. But Rabbit had nothing to offer him but some grass. So he asked the beggar to build a fire. After the beggar started the fire, Rabbit jumped into it and offered himself as a meal for the beggar to eat.

Quickly the beggar changed back into the Old Man of the Moon and pulled Rabbit from the fire. He said “You are most kind, Rabbit, but don’t do anything to harm yourself. Since you were the kindest of all to me, I’ll take you back to the moon to live with me.

The Old Man carried Rabbit in his arms back to the moon and he is still there to this very day exactly where the Old Man left him. Just look at the moon in the night sky and the rabbit is there! 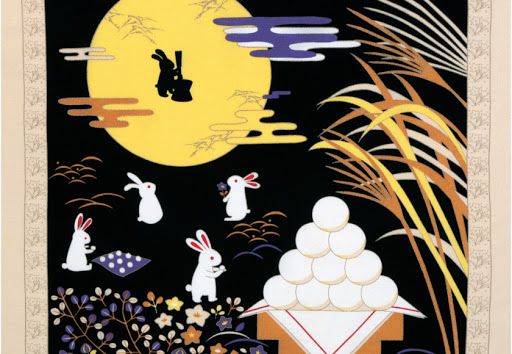 How is Tsukimi celebrated?

Traditionally Tsukimi is celebrated with family or friends. The house is decorated with branches of susuki (Japanese pampas grass that symbolize autumn).
People have Tsukimi dango in a pyramid as an offering to the Moon and they can admire and feast on a soft autumn night the splendor of the full Moon in the company of family or friends.
Unlike the hanami (festival of sakura), the tsukimi is a celebration a little less noisy and watered, which has for the principle to respect and to contemplate nature. 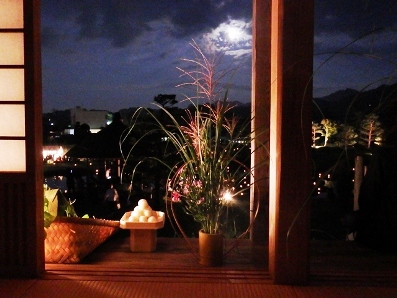 The main food is Tsukimi dango (a dumpling made from sticky rice paste and water).
Other foods such as edamame beans, chestnuts, sweet potatoes are also served. 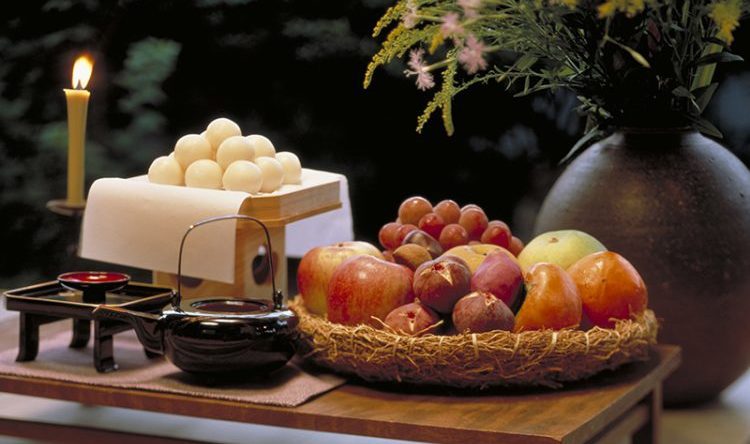 It is common to eat soba or udon noodles served with nori (dried seaweed leaf) and a raw egg in broth.
They are called Tsukimi Soba or Tsukimi Udon. Egg yolk, by its shape, recalls the full moon. 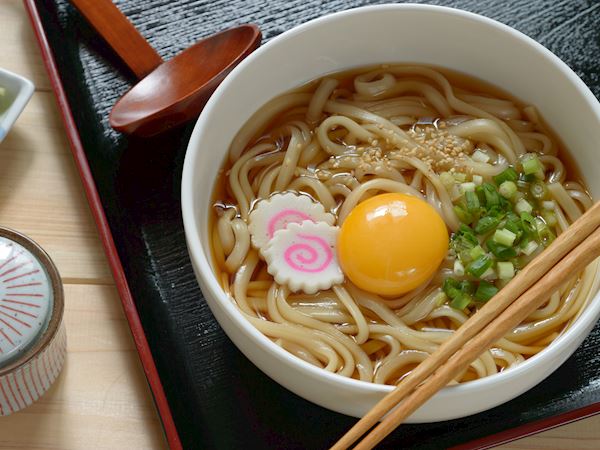 In Japan, you can even find Tsukimi Burger in some Fast Foods (including Mc Donalds) which have an egg inside.

Celebrate Tsukimi with Tanoshi Me!

Celebrate the Autumn and Tsukimi with the September Tanoshi Me Box.
There will be several products more or less related to the Tsukimi festival in the September Box.
You can expect to find some chestnut, sweet potato, and edamame products there.
It is difficult to send Tsukimi dango, but you may find some surprises that come close;)
What other products related to this festival will be in this wonderful Box?
Why not try it out? register now

One thought on “Tsukimi or Otsukmi, what is it ?”

Tanoshi Me Box
Login with Facebook Login with Google